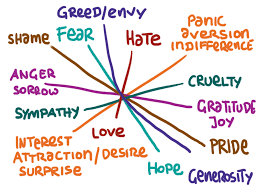 I.  Summary of recent article and its suggested exercise

I recently read an article that suggested a few exercises to help musicians play with more musicality.  The first exercise involves brainstorming a list of adjectives – at least 100 adjectives so that you (or the person you are directing to do the exercise) is forced to move beyond the more quotidienne adjectives such as “happy and sad.”  Once you have the list, the author suggests that you take five of these adjectives, all contrasting, and experiment with playing  a passage of music in such a way as to evoke those descriptors.  So for example, you might play the opening of Fur Elise hysterically, exhaustedly, furiously, nervously, and sullenly.  When you do this, assuming you are doing it successfully, each iteration of the phrase should be markedly different in shading, articulation, tempo/rubato, and other expressive devices.  For example, a hysterical rendering of the opening of Fur Elise, might be at an allegro tempo with an accelerando feeling and would likely be forte or involve a rather drastic crescendo.  But it could also waver between two emotions very quickly and therefore go from fast to slow, loud to soft, legato to marcato, accelerando to ritardando to communicate that.

By contrast, a rendering of the opening phrase which would communicate exhaustedness, would probably be heavy handed and slow, like a windup doll that was puttering out, running out of steam.

One point the author makes is that, ideally, you would want to try this exercise out with at least one partner.  When playing the excerpt, you would have them try to guess the adjectives which you are trying to evoke.  As the author mentions, if they cannot guess, you need to revisit your attempt.  The author says:

It’s interesting to note that when the performer’s intention isn’t well-formed or clear, the audience response is invariably inconsistent. On the other hand, when it’s ‘real,’ it’s easy to deduce that emotions don’t lie. They seem to bypass the intellect and leap straight into the music, through the performer to the audience.

II.  Thoughts on the suggested exercise

I love it to a certain extent although I think it would be best to work on applying different emotions to technique and other exercises.  That way, you can focus on defining one (or a few) emotions for a piece and really work on committing to it.  Plus, it seems best to integrate this kind of work into a routine practice rather than just working on it with the occasional musical passage.

The listing idea is really brilliant.  Many students have not really thought much about a wide range of emotions and certainly don’t have the vocabulary for it all.  Having them brainstorm a list is great because it really makes them explore emotions past the simple “happy, sad, scared, tired” level.

To help students brainstorm their emotion list, ask them to look at the emoticon lists in their phones, ipads, and other devices and attach a word to each one.  That should get them started.  Once they’ve got that list, help them find synonyms (or most importantly, near-synonyms) for their initial list of words.

III.  Related exercises designed to aid the musician to communicate

In college, my voice teacher used to have these flashcards sitting atop her piano.  On them were written nearly every kind of emotion and attitude I could think of at the time.  While I was vocalizing at the beginning of each lesson, she would randomly draw from the stack and hold up an emotion that I was to portray as I sang.  One of the purposes was to get me to work on the acting side of being a singer.  At the time, I hated it.  I was one of those singers (who had long been a student of piano) that didn’t understand the importance of acting and portraying a character.  I thought all that mattered was hitting notes and phrasing, etc.  I used to cringe with embarrassment when she would pull from the stack.

Now, as a teacher, I think that those exercises were some of the most important that I could have learned as a young singer and a young musician.  A singer must first and foremost connect with the audience on a visceral level – if she sings wonderfully but is stiff and has no stage presence, her performance will not be a success.

However, what I also learned from those lessons applies equally to the singer and the instrumentalist.  While stage presence and the ability to effectively convey the text of a song is vital, another perhaps more important benefit of “acting” is that if you portray the proper emotion effectively, much of the work of phrasing and planning appropriate breaths will follow.

This works for the pianist because even young children can understand that there is a difference in how you would play a scale if you were sad or happy.  To understand and feel a musical passage that way – rather than by the gut understanding of musical phrasing and interpretation that you develop, say, through discussions of the conventions of pedaling and listening to professional performances – will oftentimes result in more exciting and original interpretation.

At any rate, I think that all pianists and vocalists alike could benefit from the demands of the emotion flashcard stack and should routinely use it.

One last thought – one of the most effective methods of getting a topnotch performance out of a student I learned as a student myself.  In high school, in a lesson with Frank Heneghan, I was instructed to come up with a story line for the Debussy Prelude “Minstrels.”  The story was non-sensical but full of imagery – certain melody lines were associated with characters and types of personages.  Through this technique, I remember feeling like I really connected to the piece in a new way and my performance was vastly improved.  So here’s the advice, always try to come up with phrase by phrase imagery or story lines.  I often tell students that they should try and come up with a music video for the piece or to imagine a Fantasia-like cartoon to go with it.  That idea, in combination with the training in understanding a broad range of emotions, should produce some truly wonderful results.

This site uses Akismet to reduce spam. Learn how your comment data is processed.